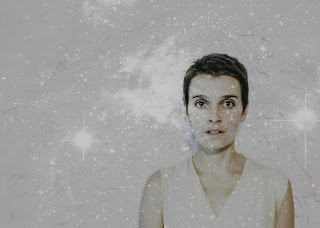 Sarah's kind of going for it again. Not that she ever stopped. When I think about the pace with which she writes and sings and how it's only rarely accompanied by anything in the way of a signal flare, I recall a time when Prince, several albums back, decided to do a press conference. Someone asked him if his latest effort was a comeback album. "Comeback from what?" he offered back with a tired smile. It's not his problem that a few million folk haven't checked back in since Sign o' the Times. Who wants to live like that? Next question.
Sarah isn't listening to her own life if she isn't writing songs. It's how she pays attention to herself and others. I labor over sentences and it takes me a sometimes embarrassingly long time. She disappears into an oversized closet and emerges with something completely remarkable an hour or two later. Sometimes she's already recorded it.
This has been our life together all along with the significant change being the recorded part. Many a kind heart will ask her if she's still making music. "Yes!" my mind screams as I remind myself that I wasn't the one who was asked the question. Her responses vary. She'll mention Bulb, but not everyone is shrewd or curious enough to ask for the elaboration that would take them into that magical, soul-enriching world. She'd likely share a song--I mean sing it--right there on the spot if someone was to ask her to and she knew they really wanted to sit still for it, but very few people seem to do that these days. How's this supposed to work for someone who generally resides to the side of the star-maker machinery behind the popular songs?
Enter JT Daly. I met him at the Trash Humpers premiere at the Belcourt through our mutual friend Chris York. He started hanging around our domicile, introducing us to music, coming to softball games, eating pizza, and building Legos. "What does Sarah need?" he got to thinking. And Wendell Berry-like, communally-minded fellow that he is, he began to assemble microphones and speakers and other hardware from friends who weren't, for the time being, using certain forms of recording equipment to cobble together what we've elected to call Twin Pop Studio. It's sitting there right now. Minus speakers at the moment.
So now we have songs, many songs, and they're beginning to surface. The opening salvo is The Trying Mark which comes to you via a couple of very kind collaborators. The first is Aaron Roche by whose music we've been amazed and nurtured since we first heard him do an Innocence Mission cover in the artists' space at DPC many moons ago (Sarah: "!Blur My Eyes really does soothe the savage beast in me."). He's in Brooklyn being awesome now, but he made time to mix the album and provide additional instrumentation and vocals. And there's also the matter of Matt Odmark. Sarah opened for the league of extraordinary gentlemen that is the Jars of Clay operation, Matt's decades-long gig, way back in the 20th century, and something came full circle when Matt offered his powers of mastering to The Trying Mark. We're intensely pleased with how it all turned out. And relatedly, I'll mention too that the above image is the work of Beth Gilmore with whom Sarah is conspiring together on something or other on many a weekday. This and many more can be viewed and procured over here.
Even as I busy myself writing about it, tweeting, playing it for students, or foisting mix CD's and playlists upon people, I still don't know the best way to urge the goodness upon people. I wouldn't remove a song or change the order, but if you were tell me you're only willing to sit quietly long enough to take in one song on the album (That would be kind of mean, by the way), I would refer you to "When Things Fall Apart" and trust that you might now feel compelled to take in the whole thing. And if you wanted to drop in a little something to maintain the current of the Get Fresh Flow...I think that'd be appropriate.
That's about it. Sarah has a few specific words concerning the project's origins as well. Do please tell us what you think and talk it up as you see fit. Despite the risk of saturating the market, Sarah's playing a few shows in the weeks to come, and there's more music on the horizon. Stay tuned.