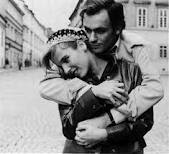 In love we're all the same
We're walking down an empty street
Tonight and every night...
Let's go walking down this empty street
Let's walk in the cool evening light
Wrong or right
Be at my side
The Blue Nile, Downtown Lights

So tonight The Blue Nile is playing. Children are watching Eddie Murphy in some new movie that isn't as wonderful as Bowfinger. The cups are filled with box wine kicks. Author and stand-up wordsmith, David Dark, is washing dishes. The inner-view begins.

IV: Alright... as we are comically quotidian at the moment, let's talk about Romance. What do you make of it?

DD: I want everyone to have it. I think of Portia in The Merchant of Venice when she told Bassanio that his gaze divided her heart, giving one half to him and the other, if it's still hers, also his. I think too of the tale Dmitri told his brother Alyosha (in Brothers Karamazov) of the night Katerina Ivanovna came to him, thanking him for sparing her drunken father some form of debtor's indignity by offering him her body. He was so moved by her beauty and nobility that, contrary to his usual pattern, he refused her offer. After she left, he stood there amazed at himself, overwhelmed at their exchange and so doubtful that he would obtain such heights of ecstasy again that he drew his sword and, by his account, came close to impaling himself. I think of something like the desire to pour your own life into what you take to be the depths of another human being. This is what comes to my mind when I think of romance.
Posted by jdaviddark at 5:11 PM

Bowfinger IS a classic. Hey there, it was sure good meeting you and I look forward to applying your ideas in my writing life.

Can we refer to Bowfinger as "Steve Martin in a movie that isn't as wonderful as Planes, Trains and Automobiles?" And, believe me, this ain't none a knock on Bowfinger. I do love the chubby rain.

J. Andrew Camp said...
This comment has been removed by a blog administrator.
8:37 PM

Tee-Hee J. Andrew. And, hello David! We so enjoyed meeting you as well. What a magic weekend. More joy to come I imagine.
Sarah