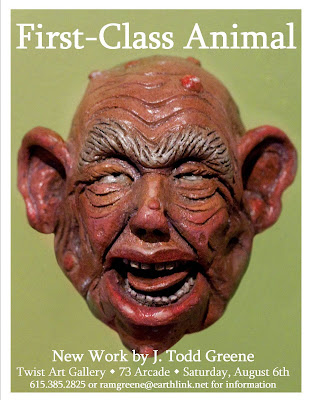 Hold your applause. It's...Well it's more of the different same. Todd Greene continues his journey under the tutelage of Bankei, and it's got him mashing up the 12 stations of the cross with Bankei's 12 stages of agitation; going all first-class animal being the first stage of being unborn. I find the above image helpfully reminiscent of any of the Seven Deadly Enemies one finds within the Rock of Eternity, the lair of the wizard Shazam of Captain Marvel fame.
The fortunate few who come out to the Twist this Saturday evening and onward will be privileged to behold the following:
Hungry Ghost, the Mealy-mouthed Swindler, Double Mind, Transmigrator, and Void of the Human. This last one draws from the collaborative volume b/w Aimé Césaire and Picasso called Lost Body which your reporter procured from a Detroit bookstore for Mr. Greene. There are elements that the terminology of warning would deem graphic.
"Why would I pass a Saturday evening exploring this sort of thing?" I can't answer this question for you, but I'll try. If the alternative to a weekend consisting of one soul-sucking vacuum after another vying for your attention, hijacking your equilibrium, disturbing your peace is an immersion in attempted mindfulness, what could be more worthwhile? It could enliven our relationships, make our hearts a little less manic. In any case, J. Todd Greene has another show going on exactly one room over from "First-Class Animal." Drawing upon James Carse's Finite and Infinite Games, there are two titles to choose from: "Unheard Silence" OR "Myths Are Like Magic Trees." Here's Carse: ”Myths are like magic trees in the garden of culture. They do not grow on but out of silent earth, of nature. The more we strip these trees of their fruit or prune them back to our favorite design, the more imposing and fecund they become.” I've only had it described to me so far, but I hope to have an image or two up for you today or tomorrow. I'm tempted to rattle on about Carse, but I should probably save it for another post. We've been reading him to one another around here all summer. Come on out and join the conversation. I leave you with more Carse. All evil might be an overstatement, but the line gives helpful pause as is:
“Evil is never intended as evil—Indeed the contradiction inherit in all evil is that it originates in the desire to eliminate evil.”
Posted by jdaviddark at 2:53 PM

I love Carse... re-read "Breakfast at the Victory this summer and was activated by it in some way I find it hard to describe.