So Many of Us

"Reality has always had too many heads."
Bob Dylan, "Cold Irons Bound"

“How hard I find it to see what is right in front of my eyes.”
Ludwig Wittgenstein

Our toes, our noses
Take hold on the loam,
Acquire the air.

Nobody sees us,
Stops us, betrays us;
The small grains make room.

Soft fists insist on
Heaving the needles,
The leafy bedding,

Even the paving.
Our hammers, our rams,
Earless and eyeless,

Perfectly voiceless,
Widen the crannies,
Shoulder through holes. We

Diet on water,
On crumbs of shadow,
Bland-mannered, asking

We are shelves, we are
Tables, we are meek,
We are edible,

Nudgers and shovers
In spite of ourselves.
Our kind multiplies:

We shall by morning
Inherit the earth.
Our foot's in the door.

The Wise Trip On Grace

It occurred to me that a good number of people with whom we hang these days might not know this side of my...What do they it..Better half. If you can pull yourself away from the fact of the devastatingly charming woman for a moment, the song is also really something. All seamless I reckon.
Happy Bloomsday,
jdd
p.s. One can apparently acquire a crisper version on ITunes. 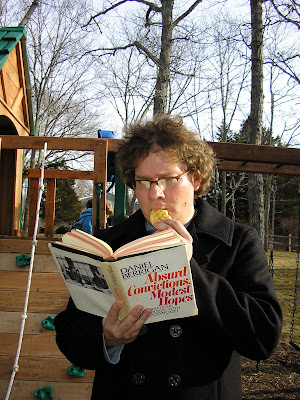 My brother Joel is reading 1st Corinthians 13 during my cousin's wedding this evening (Congratulations Susan and Cliff!). The power of cliche, Joel observed, is devastating. And what I believe he meant is the way we shrink-wrap the passage to fit our greeting-card-sized, sentimental sensibilities (not that there's anything wrong with greeting cards). Joel says 1st Corinthians 13 is, among other things, a political critique, a critique that gets bypassed whenever we reduce Paul's privileging of real, live, doable love to something that 'sposed to happen in the sweet by and by. "Language will cease," isn't strictly "Just you wait." It's a relativizing of all our noisy gong/clanging symbol goings-on right now. Our carrying on over politics and doctrines and what we're mad about, when it's bereft of love, really is even now exactly nothing. And when people can't sense love in what we're going on about (e-mails, blogs, writings, opinionating), it really isn't going to get through. It might be full of sound and fury and sincerity but it signifies nothing. Joel sealed the deal (rather casually over coffee while the boys stared at Cartoon Network) when he noted that some e-mails are filed under "noisy gong" the moment he sees their subject heading. The scatter-shot, mass e-mails, I should clarify on his behalf, not when anyone's actually talking to him. Anyway, the idea that Paul was writing a letter to particular people in danger of forgetting what prophesying, pontificating, and prattling on are for (what people are are for) hit me anew today. Wanted to make a record.
A jarringly redemptive next week to everyone.
Posted by jdaviddark at 5:28 AM 10 comments:

This probably isn't the best way to introduce the uninitiated to Buddy Greene, but it is does ope the curtain a little. Sarah and I passed a few days in Texas talking Bible and Dylan and Shakespeare and John Hartford and sharing songs with him and the gathered at an amazing place called Laity Lodge. A prevailing topic: What does Big Rock Candy Mountain have to do with God's economy? That sort of thing. Such a rich, invigorating time. Shout-outs to Buddy and Vicki and Kenny and Laura and Stephen and Amy and all the assembled heartbeats.