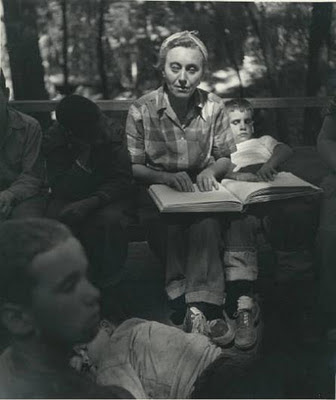 The mysteries don't scare me anymore. Someone once said that all silence is the recognition of a mystery, but I don't believe that anymore and I'm not sure I ever did. I think silence is many things (a sort of reading room or academy of mysteries, maybe), and many of them fine, but I don't think it's a recognition of a mystery. That's much too general. You might recognize a mystery in the loudest room or the most crowded street or in the face of a passing stranger or the furtive smile of someone you love.
When you do recognize a mystery, though --when you really recognize a mystery-- I believe you're compelled to address it, to try to speak its name and describe its features, to give it a face so that you will recognize and remember it until the end of your days. Because it's no small thing, the recognition of a mystery, even though it happens all the time and we may not even be properly aware of it. Still, I believe such recognition calls for some banging of pots and pans, some fireworks, some exultant noise.

A few months ago, IV sat down with seasoned poet, musician, critic, and mystery describe-er, Joe Nolan, to talk religion. What follows is another beautifully described mystery. All who have ears, what do you think? Describe it in your way. Keep it essential, in the footsteps of Joe.

IV: Annie Dillard worded the sigh, "Who knows what God loves?" It messed me up for years. Now I hear it as a helpfully cathartic/poetic cry that holds a confession of deep love mixed evenly with complete and utter unknowing. Is faith even possible?

JN: There is a broken empty space where Christianity exists.
Posted by jdaviddark at 5:52 AM 3 comments: