My dear friend, the renaissance man Geoff Little, thought it might be worthwhile to ask me some questions with a camera rolling, and this is a mere smidgin of at least an hours worth of footage (the first of many more to come). Quite the gift to get me going in this way and to take the time to edit the thing. Thank you, Geoff, for thinking of it and even naming a time and place (that's his wondrous kitchen table) and for giving me something to put up as I try to figure out what I have to say about Beck's Modern Guilt and the Dark Knight film. I hope it at least provides a giggle for those who haven't seen me in person in some time. I do like to prattle. 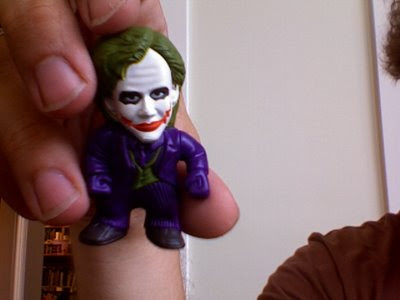 This doesn't work. I found it on the carpet at my mother's house where I was informed that it came out of a Cheerios box. "But the arm moves!" my mom exclaimed, knowing darn well just how to get me started. How the child psychologists under the employ of Fortune500 multinational corporations to accelerate sales of units could have let this pass is a question worth posing. Cross-marketing genius? Not at all. Whose profit? Whose mental health? Whose dreams are they looking out for? Why the nightmare raid on a baby's imagination?
Don't get me wrong. I still remember the thrill it was to me when Frank Miller gave us a drawing of the Joker (Issue #1 of the Dark Knight...twenty-something years ago) with a face disturbingly and inspiringly plain-looking. No impossibly long chin. Just a dude with never-to-be-washed-off make-up. It seemed to me at the time (years before Tim Burton went horseback riding with Jack Nicholson with an interesting proposition) that the people in charge should give Willem Defoe or, believe it or not, Michael Keaton a crack at the role. I'll be there for Heath Ledger's performance of a lifetime. Believe me.
But this little artifact of psychotic marketeering...If I was standing in a factory in China stamping these things out by the millions, I would have some not happy thoughts toward that strange land faraway, the land of this little babyman scaryclown's origin, a land that has an interesting speech habit whereby it decrees and advertises itself as "freedom itself," a city on a hill, a light unto the nations.
TO Mr. and Mrs. General Mills, you shouldn't have consented to or arranged this. Focus on the family. Stop the plastic presses.
TO friends and readers, isn't this hilariously bad? I'm carring him around in my pocket. Sarah refuses to look at it a second time.
Fondly,
jdd
Posted by jdaviddark at 11:58 AM 15 comments: 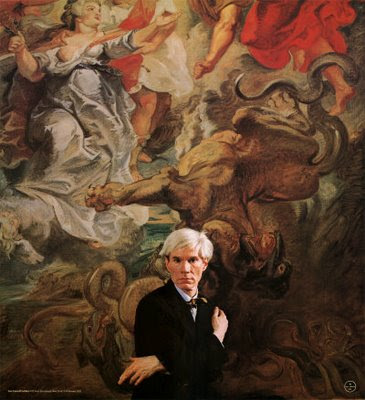 Sometimes Andy Warhol said something. It was simple, what he said, but it was not a comfort. He was so polite, but it was not a comfort. He used simple words, words that honored the idea of simple agreement—“Oh, it’s so big!” and “Oh yes!” and “Oh, he was so cute!”—but there was no comfort in the agreement. And sometimes the agreement turned a corner, “Oh, he was so cute! But all he was interested in was drugs.”
Andy Warhol looked like a little god. It was so comforting the way he made everything uncomfortable. And the way the damage rose to the surface around him. The people around him had this in common, at first: a sense of sin. They knew what was damaged and what was whole. Andy Warhol knew, too. But sometimes he was coy. Sometimes he wouldn’t tell. People around him wondered if they had got it right. People around him wondered if they should be more damaged or more whole. It was hard to tell.

--George W.S. Trow, Within the Context of No Context
Posted by jdaviddark at 12:33 PM 13 comments: