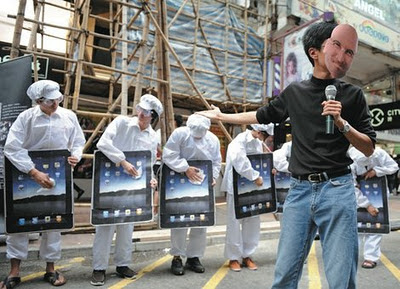 Machina ex deus. How else to explain their popularity despite the fact that they actually come from places that do not make us better people for owning them, the factories in China where more than a dozen young workers have committed suicide, some by jumping; where workers must now sign a pledge stating that they will not try to kill themselves but if they do, their families will not seek damages; where three people died and fifteen were injured when dust exploded; where 137 people exposed to a toxic chemical suffered nerve damage; where Apple offers injured workers no recompense; where workers, some as young as thirteen, according to an article in The New York Times, typically put in seventy-two-hour weeks, sometimes more, with minimal compensation, few breaks, and little food, to satisfy the overwhelming demand generated by the theatrics, the marketing, the packaging, the consummate engineering, and the herd instinct; and where, it goes without saying, the people who make all this cannot afford to buy it?
"Who Was Steve Jobs?" - Sue Halpern, New York Review of Books
Update: A glimmer of hope on the question of supply chain transparency here (w/ thanks to Geoff Lovett)
Posted by jdaviddark at 7:56 AM 6 comments: