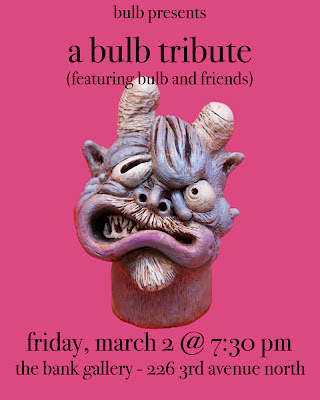 UPDATE! The Bulb show has been outwitted by Tornado warnings. Tune in for a new date dang soon.
To celebrate their twentieth album, Anthony Doling, Randall Lancaster, Todd Greene, and Sarah Masen of Bulb have agreed to host their own tribute show. Upon request, they can probably be persuaded to perform their songs personally, but the idea behind the situation on Friday is to afford others the opportunity to perform songs themselves. And if a lead vocal is all you imagine you can manage, Bulb will back you in every way they can. Does this make sense? I trust it does.
If you need your memory jogged OR you have yet to partake of the pleasures of Bulb, they have seen fit to open the vault. This isn't to say that every Bulb song is on offer, but 79 had been made available the last time I checked. Everyone is seriously welcome. Bulb are not snobs. Some songs have already been claimed, so you might want to check with me if you're determined to be completely original. And if you'd be most comfortable practicing the song with Bulb beforehand, you can drop by the venue on Thursday evening to do so. Should you choose this route, let me know and I'll give you the number of an individual who can let you in.
This is all.
Postscript: Here's a Bulb video.
Posted by jdaviddark at 1:13 PM No comments:

It Is Happening Again 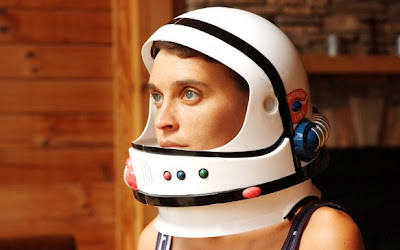 Where to begin? She isn't doing showcases or seeking out a deal or networking or anything, but she keeps right on making a vineyard of the curse with a framing of a verse. This, we understand, has never stopped. The communal function of song does not cease in the life of Sarah Masen. She shows up and plays when asked, and the latest is a return visit to the Green Wood Coffee House. There's also a Bulb covers show next Friday, but, as perusual, it's so underground that I have nowhere to point you on the Internets. I believe they're up to twenty albums now, and they'll personally back anyone who wants to take a stab at singing one of their songs. I'll be doing so myself. Let me know if you'd like the coordinates.
Oh, and here's an interview with Sarah.
Posted by jdaviddark at 7:18 PM 3 comments: 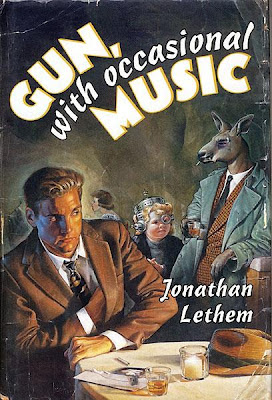 The above scene with it's prognosticatory riff on the social possibilities that exit the picture when something like the iPhone's Siri appears among us is from way back in 1994 when Jonathan Lethem's first novel, Gun, With Occasional Music, arrived on the scene. It's an undisclosed future era that owes as much to Raymond Chandler as it does to Philip K. Dick. He gives us cyborg slavebots, mammals evolved to human intelligence levels, the outlawing of the written word, and a culture in which out-loud recognition of someone else's electronic appliance is considered impolite. I'm a little ashamed to have arrived in Lethem land so late in the game, but none of my sources have talked him up (C'mon sources!). Let the record show that I am now drinking his Kool-Aid, but I'll have to pace myself. Raised on a sense of comic book continuity, I find I have to start at the beginning and work my way up. It's how I roll. Two words: Amnesia Moon.
Posted by jdaviddark at 1:38 PM 2 comments: 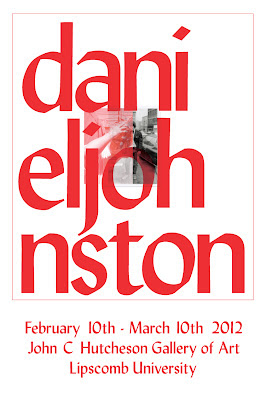 Sisters and brothers, pay attention. Today's what we might call Daniel Johnston Day at Lipscomb. The man's art will be on display on campus for the next few weeks, and he'll be on hand for a performance this evening at 8:00.
While one of the narrators in the documentary, The Devil and Daniel Johnston, almost captured a sliver of something in describing Johnston's people as a kind of fundamentalist Glass family in the Salinger vein, his role as a practitioner of--what shall we call it?--the biblical imagination has gone largely unremarked upon, except in the most dismissive sense, and his place as a pilgrim within and without "Church of Christ" culture, a peculiar inheritance he shares with Roy Orbison, is mostly visible to those who share such attachments. At noon today, this situation will begin to change as Gregory Alan Thornbury offers a provocative word concerning Johnston's witness entitled "Does Daniel Johnston Believe More Bible Than You?" I'm set to moderate discussion and offer a response. I read the whole thing aloud to Sarah this morning and we were simply amazed. I know his offering will be available in published form at some point in the near future, but you can partake of the conversation personally if you can make it to Lipscomb within the next hour and a half. Exit your cubicle now.
Posted by jdaviddark at 8:25 AM No comments:

"The Cult!" Stu and I exclaim almost simultaneously. And just as we realize it's a mashup underway Dory weighs in to assure us it's Flo Rida's "Good Feeling" that's going on. I'll bet this exchange is happening in millions of households; that it's all, in fact, calbrated. I make a mental note to educate Dory sometime soon concerning what 1985's "She Sells Sanctuary" once did for a sixteen-year-old Nashvillian on his way to marching band practice.
Just this morning, I was trying to give an account of how weirdly moved I was by the whole thing when Sarah chimed in to help me out: "It only worked on an emotional level?" Yes, sort of. "Trick-motional?" I suppose so. There's the admonition to love the life that we're living, the sound of a man of color asserting he'll be the President one day interspersed with the hope of walking on water, prevailing in a lion's den, and being possessed of a brand new spirit with all these loving interactions between people of differing class and ethnicity in historic scenes that definitely didn't actually go that way. And as my heart goes back to the teenage feeling, I see a white headbanger--I knew quite a few back then--being crowd-surfed in a bar and held up to a window where he exchanges an affectionate glance of celebratory solidarity with a brown-skinned woman across the street. This is as I'm still processing the white woman getting all free doing the robot which evokes, for me, the video for "Planet Rock" by Afrika Bambaataa & Soul Sonic force. I got weepy just trying to talk about it. Sarah listened and watched as I held the laptop in the bathroom but was largely unmoved. I guess that's what I get for being born in the sixties. I'd very much like to have a conversation with the Don Draper who conjured the thing.
Sarah listens, and she's happy for any and everyone's creative breakthroughs. But she generally views these expensive productions as a waste of perfectly good emotion. "Who broke through to what?" she'll likely ask. She bristles, prophetically I'd say, over the fact that the image of Martin Luther King Jr., for instance, could be sold to Apple to sell products cobbled together by people crushed by death-dealing working conditions. I don't have a "But..." to follow or qualify this sense of dis-ease except to register a few readings/findings/thoughts that have arisen in the days following.
I once asked my Comp II class to write out an account of an instance in which they believe they heard their own voice in someone else's. It could be something someone said, but it could also be a song, a film, a book, a visual, or a performance in which someone said what they wanted to say but differently or better or in a way that somehow uniquely got through to them. The prompt is usually preceded by a presentation of Bob Dylan's "Last Thoughts on Woody Guthrie." We all have a Woody Guthrie of one kind or another, I tell them. When I deliver this particular assignment again, I believe I'll follow it up somehow with this from Robert Pinsky's Democracy, Culture and the Voice of Poetry: “What makes us all one—and what makes us all different—seems deeply involved with a voice: a voice that is both imagined and actual; both inner and social; both mine and someone else’s; that separates me and includes me. It will not do to sentimentalize this voice.”
I believe Sarah's often more alive than I am to the dangers--the cruelty even--of such sentimentalization. I see so many of my own hopes and dreams reflected back to me in this dadgum beer commercial, but there's a difference between getting choked up over scenes of racial/class harmony and giving--or receiving--a voice. Fantasy or lived relationship. Hyped-up, momentary feel-good versus actually paying attention to a living someone. One can pass a lifetime mistaking the two. It will not do to sentimentalize.
And this might be a completely ridiculous stretch, but Pinsky ends his book with Edward Arlington Robinson's "Eros Turannos" whose cadence--if you can believe it--slightly resembles that of Flo Rida's "Good Feeling." I don't know what this says about the way I process things, but I think it got through to me all the more thanks to the commercial. As I read it alongside Flo Rida, the one somehow enriches the other, but Robinson's offering is so sad; revivifyingly so, after a Super Bowl.
Posted by jdaviddark at 10:33 AM 2 comments: