Letting The Days Go By

I think I was 14 when I first saw this on MTV. At the time, it struck me as about the coolest thing I'd ever seen; funny and profound and moving in ways I could feel without being able to articulate exactly what I felt. Still feeling it.
Got to meet David Byrne a few weeks ago when he showed up at Grimey's, and he struck me as a kind, curious man with the vitality of someone who really believes that time is neither holding us nor is it after us. Very generous and attentive. Made me feel cool when he laughed loudly at something I said.
This feels like a good performance to post in view of the days ahead in the land of my sojourn. I dedicate it to my friend, Porkpie. 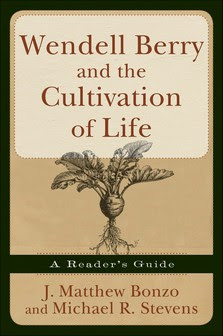 Once one is exposed to the comprehensive wit of Wendell Berry, there is no going back. The question 'What Would Wendell Berry Do?' comes to inform all manner of decisions in our buying, selling, and doing. In a treatment that is both wide-ranging and robustly evangelical, Bonzo and Stevens bring Berry's witness to bear upon one dim-witted economy after another with an invigorating account of Berry's more magnanimous economic vision. In a constant call to look harder at the world we're in, creation is imagined not as a resource for endless plundering but rather the place where God's kingdom, the great economy, comes, offering the hospitality that sustains, our only home and our only hope.
Posted by jdaviddark at 12:19 PM 1 comment: 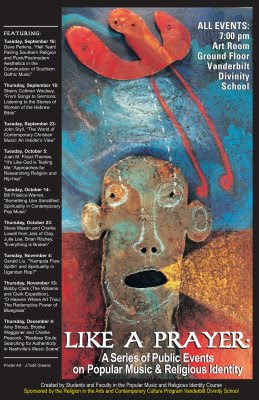 Here’s what it is: Steve Mason and Charlie Lowell (you’ll perhaps know them from such musical ventures as JARS OF CLAY), Brian Ritchey, Cary Gibson, founding performer of the Belfast-based collective called ikon, Matthew Perryman Jones, Katie Herzig, one Sarah Masen probably, Tom Wills with his moving images, and everyone else who comes. It’s called "EVERYTHING IS BROKEN. It's songs and thoughts and conversation and maybe a Bukowski poem. 7:00 to 8:30. THIS THURSDAY NIGHT...October 23. It's part of a program called "LIKE A PRAYER" that's been going on all semester (see the magnificent Todd Greene image above...click to enlarge). This is the HUMAN CONDITION component to be followed by more proclamation-ish evenings. This would be the ecclesiates section, if you like. The lamentation/confession/complaining piece of lyrical witness. The nod to the parts of the Bible (most parts?) which might not look so good inscribed on a poster with a basket-full of puppies. For a second or two, I thought we might do well to call it “Sad Songs Say So Much.” Coffee will flow. My partners in crime with whom I’m directing/emceeing the evening are Philip Hood, Andrea Thornton, and Lauren Roden. Come on out. Come with questions. How does the market serve/obstruct the possibilies of artistic witness? What are we waiting for? How is justice served when we say what we feel, not what we ought to say? When has a sad, straight-shooting song turned everything around? How did it help? Let’s talk.
Posted by jdaviddark at 2:34 PM 9 comments:

In the Company of the Law

I thank Chris Smit for this ministry opportunity.

Detroit, lift up your weary head! 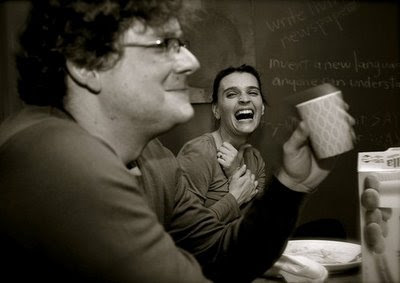 We listened to Steve Martin's comedy albums on the drive to Detroit today (sans kids). Some Prince and Bob Dylan and P.J. Harvey and Neil Young and Leonard Cohen and Blue Nile and REM too. Hours to talk and think and remember that we really like other. Special thanks to the extraordinary personage, Jude Adam, for looking after our spawn. I'm about to fade into a headache-relieving sleep, but I wanted to post word concerning what could be called a sort of double-header. THIS Friday evening (10th of October), Sarah and Ric Hordinski are playing the Trinity House Theatre at 8:00. In view of the ever-faithful hometown crowd, it might already be sold-out, but it also might not be. One could google the venue or phone them (734.464.6302). And I'm speaking there the next morning. A 9:30 to 11:45 sort of thing. The USA. The elections. How we might be agents of redemptive unease and witnesses to the economy to come. Anyway, I was going to feel bad if I didn't issue a heads-up. And maybe some someone reading this is within doable distance. I hope everyone's weekend is remarkably good.
Posted by jdaviddark at 7:24 PM 13 comments:

Apocalyptic for the People 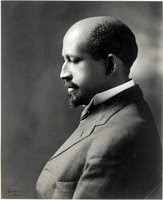 Suppose on some gray day, as you plod down Wall Street, you should see God sitting on the Treasury steps, in His Glory, with the thunders curved about him? Suppose on Michigan Avenue, between the lakes and hills of stone, and in the midst of hastening automobiles and jostling crowds, suddenly you see living and walking toward you, the Christ, with sorrow and sunshine in his face?
Foolish talk, all of this you say, of course; and that is because no American now believes in his religion. Its facts are mere symbolism; its revelation vague generalities; its ethics a matter of carefully balanced gain. But to most of the four million black folk emancipated by civil war, God was real. They knew him. They had met him personally in many a wild orgy, or in the black stillness of the night. His plan for them was clear; they were to suffer and be degraded, and then afterwards by divine edict, raised to manhood and power; and so on January 1, 1863, He made them free.
It was all foolish, bizarre, and tawdry. Gangs of dirty Negroes howling and dancing; poverty-stricken ignorant laborers mistaking war, destruction, and revolution for the mystery of the free human soul; and yet to these Black folk it was the Apocalypse."The magnificent trumpet tones of Hebrew Scripture, transmuted and oddly changed, became a brand new Gospel. All that was Beauty, all that was Love, all that was Truth, stood on top of those mad mornings and sang with the stars. A great human sob shrieked in the wind, and tossed its tears upon the sea -- free, free, free.
--W.E.B. Du Bois, Black Reconstruction in America 1860-1880
Posted by jdaviddark at 7:12 AM 4 comments:

Notice the pained look on his face when a man cries out the answer many within his campaign appear to be to be working toward. I wish he'd taken the opportunity to say, "That's not what we're about." It would have been an inspiring leadership moment. I feel for him if he thinks such leadership is something he can no longer afford. 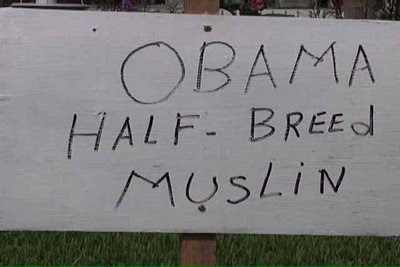 In a phone conversation a few nights ago, my mother told me that she'd walked out of a church service praying that people would be able to see Barack Obama as they should. It occurred to me that this was about the wisest, most redemptively religious sensibility I'd witnessed during our election season. She wasn't stumping for him. I imagine she'd join me in praying the same thing concerning the way people see John McCain and any political figure over whom people can get--How shall I put it?--demonically worked up. There are people whose pulses will quicken if you mention how nice it is of Jimmy Carter to build houses for the poor, and there are people who will become visibly agitated if you calmly assert that George W. Bush means well and prays sincerely. I usually don't know what to do when meanness or rage gets hold. But I do know to at least try to pray. Maybe prayer is always just a try. Maybe there's a way of talking about these things that's prayerful without being sanctimonious. A way of communicating in something other than conversation-stoppers.
My mother said she was especially moved when she watched Obama exit the stage in Oxford, Mississippi. In my historical deafness, I didn't know what she was talking about. She explained that he would have been rightfully afraid for his life (and the life of his family) if he'd publicly appeared on that stage just a few decades ago. She was right. And she was right to be moved.
My prayer is that we would all be rightly moved. Righteously moved in the direction of the already-yet-still-to-come kingdom for which many Republicans and Democrats pray, never knowing what we're doing exactly. I pray that we would feel some affection--somehow actually like--the people we can't imagine ourselves voting for and the friends, family, and neighbors we suspect--with fear and trembling--will vote for them. Amid the din of hi-tech carnival barkers, loud televised people who claim to be without spin, and gentle mortals like myself who receive their words into their heads like a shot of espresso every few minutes through e-mails, radio broadcasts, and frantic visits to websites, may our hearts remain open to the possibility of being rightly moved.
Posted by jdaviddark at 11:29 AM 13 comments: 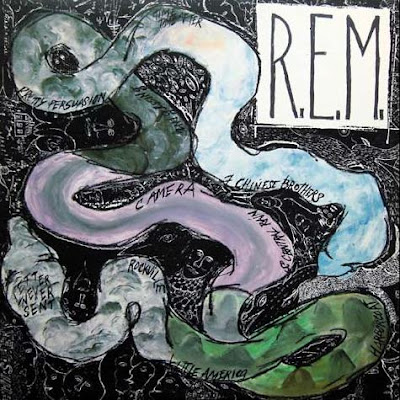 The Reckoning
by Theodore Roethke

All profits disappear: the gain
Of ease, the hoarded, secret sum;
And now grim digits of old pain
Return to litter up our home.

We hunt the cause of ruin, add,
Subtract, and put ourselves in pawn;
For all our scratching on the pad,
We cannot trace the error down.

What we are seeking is a fare
One way, a chance to be secure:
The lack that keeps us what we are,
The penny that usurps the poor.
Posted by jdaviddark at 8:01 PM 3 comments: