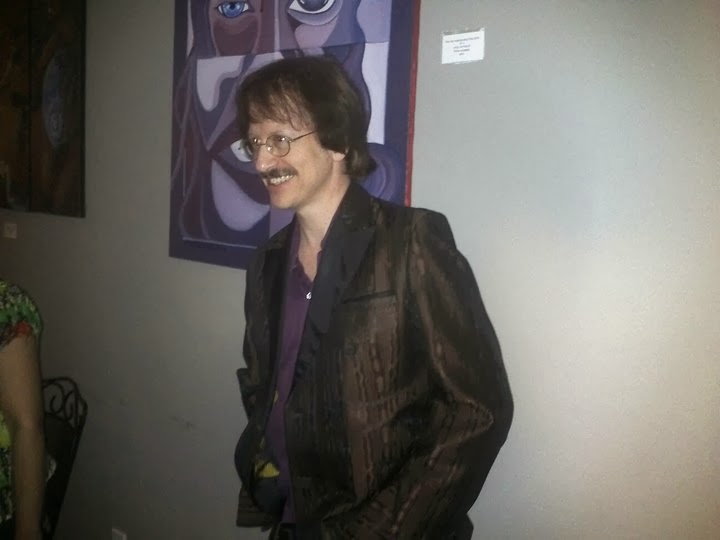 I'd like to call your attention to the living fact of Carter Moody. In the final weeks of the 20th century, we met regularly in what came to be modestly referred to as Writing Group. Each week someone would drop upon the lot of us a few parameters involving a provocative starter-idea (Write a story involving time travel. Tell the tale of a lie. Recount a conversation without using dialogue), and we'd all set off for half an hour and return to share what we'd cooked up. Carter's offerings often left many of us in the dust, but his "You're doing it too!" delivery and the hopeful attentiveness with which he regarded our shots at creativity set a precedent for everyone in the circle of poetic intelligence gathering. He was intensely well-versed in the work of throwing lively words together and making sure we all felt invited--called even--to the process. What process? I think its literacy I'm talking about. As I view these things, my son Sam unwittingly channelled Carter recently when he observed aloud, "Literacy is about cooperating with people."

Over time, I realized Carter had been doing this sort of thing in Nashville for decades. He was there, ordering and stocking books on the subject of Apartheid in South Africa at the Downtown Public Library in the seventies and eighties. Around ever corner, he can be spotted giving the gift of his presence, time, and resources to countless under-advertised causes, artists, musicians, and local concerns. In recent years, you'll most likely find him at Bookman/Bookwoman on 21st Avenue, quietly mulling over a question a customer's put to him or tracking down a volume that might be just the the thing for the story-hungry pilgrim who's wandered in.
So while I'm pleased to have an excuse to recall a few of the ways Carter persists as a community pillar, an artisan of the possible in the Nashville scene, the occasion for doing so is the financial fix Carter finds himself in due to persistent health problems. He continues to devote his energy and his wit to all manner of good things, and he's especially keen to do so in the form of "perks" on the Indiegogo platform. But whether you decide to take him up on this offer or not, I'm honored to call your attention to one avenue for getting in on his act. Have a look. And thank you for doing so.