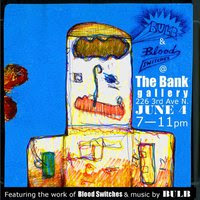 The creative powers of Todd Greene keep right on giving. At long last, a recent Bulb offering is thine for the taking right here. And then there's the matter of Todd's recent fascination with Bankei which informs his show at the Bank Gallery this weekend.
According to Bankei's Unborn (fu-sho) Zen teaching--which Todd interpolates with the phrase "Fo sho"--everyone's born with an unborn Buddha mind. Bankei would begin his talks by asserting that everyone within shouting distance is already enlightened. Rivalry, resentment, fear, and the urge to justify ourselves has us transmogrifying our given Buddha mind into a hungry ghost, a fighting spirit, a deluded existence of our own making. "Don't side with yourself," Bankei warns. Stop trying to hurry up and matter. Let it go.
And here we have something deeply in sync with Todd's democratic sensibility when it comes to images, lyricism, and teaching. With 16 or so Bulb albums which he's prone to give away with a word of thanks to anyone who asks and work that stuns anyone who pays it heed even as Todd urges his audience to have a go at it themselves, he seems to have found himself a contemporary in Bankei. "You don't need to ask forgiveness at the Bank Gallery," reads the website. It's all there.
Oh and Dead Man's Breath. I was talking Bankei with Sarah at a swimming pool when Peter explained an underwater technique he'd been perfecting nearby. "Dead man's breath," he said. "You just have to not care about being dead." This we will file away with his 'chother teaching. That is all.
Posted by jdaviddark at 2:10 PM 2 comments: