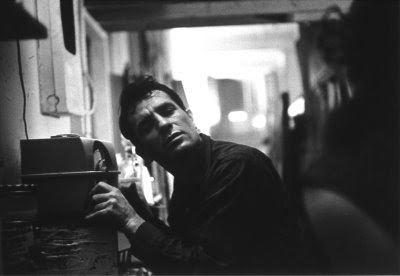 ESSENTIALS OF SPONTANEOUS PROSE
by Jack Kerouac
SET-UP The object is set before the mind, either in reality. as in sketching (before a landscape or teacup or old face) or is set in the memory wherein it becomes the sketching from memory of a definite image-object.
PROCEDURE Time being of the essence in the purity of speech, sketching language is undisturbed flow from the mind of personal secret idea-words, blowing (as per jazz musician) on subject of image.
METHOD No periods separating sentence-structures already arbitrarily riddled by false colons and timid usually needless commas-but the vigorous space dash separating rhetorical breathing (as jazz musician drawing breath between outblown phrases)--"measured pauses which are the essentials of our speech"--"divisions of the sounds we hear"-"time and how to note it down." (William Carlos Williams)
SCOPING Not "selectivity' Iof expression but following free deviation (association) of mind into limitless blow-on-subject seas of thought, swimming in sea of English with no discipline other than rhythms of rhetorical exhalation and expostulated statement, like a fist coming down on a table with each complete utterance, bang! (the space dash)-Blow as deep as you want-write as deeply, fish as far down as you want, satisfy yourself first, then reader cannot fail to receive telepathic shock and meaning-excitement by same laws operating in his own human mind.
LAG IN PROCEDURE No pause to think of proper word but the infantile pileup of scatological buildup words till satisfaction is gained, which will turn out to be a great appending rhythm to a thought and be in accordance with Great Law of timing.
TIMING Nothing is muddy that runs in time and to laws of time-Shakespearian stress of dramatic need to speak now in own unalterable way or forever hold tongue-no revisions (except obvious rational mistakes, such as names or calculated insertions in act of not writing but inserting).
CENTER OF INTEREST Begin not from preconceived idea of what to say about image but from jewel center of interest in subject of image at moment of writing, and write outwards swimming in sea of language to peripheral release and exhaustion-Do not afterthink except for poetic or P. S. reasons. Never afterthink to "improve" or defray impressions, as, the best writing is always the most painful personal wrung-out tossed from cradle warm protective mind-tap from yourself the song of yourself, blow!-now!-your way is your only way-"good"-or "bad"-always honest ("ludi- crous"), spontaneous, "confessionals' interesting, because not "crafted." Craft is craft.
STRUCTURE OF WORK Modern bizarre structures (science fiction, etc.) arise from language being dead, "different" themes give illusion of "new" life. Follow roughly outlines in outfanning movement over subject, as river rock, so mindflow over jewel-center need (run your mind over it, once) arriving at pivot, where what was dim-formed "beginning" becomes sharp-necessitating "ending" and language shortens in race to wire of time-race of work, following laws of Deep Form, to conclusion, last words, last trickle-Night is The End.
MENTAL STATE If possible write "without consciousness" in semi-trance (as Yeats' later "trance writing") allowing subconscious to admit in own uninhibited interesting necessary and so "modern" language what conscious art would censor, and write excitedly, swiftly, with writing-or-typing-cramps, in accordance (as from center to periphery) with laws of orgasm, Reich's "beclouding of consciousness." Come from within, out-to relaxed and said.

"We have all known the long loneliness and we have learned that the only solution is love and that love comes with community."
Dorothy Day
Posted by jdaviddark at 9:00 AM 4 comments:

The owners of the land came to the land, or more often a spokesman for the owners came...
Some of the owner men were kind because they hated what they had to do, and some of them were angry because they hated to be cruel, and some were cold because they had long ago found that one could not be an owner unless one were cold. And all of them were caught in something larger than themselves. Some of them hated the mathematics that drove them, and some were afraid, and some worshipped the mathematics because it provided a refuge from thought and from feeling. If a bank or finance company owned the land, the owner man said: The Bank — or the Company — needs — wants — insists — must have — as though the Bank or the Company were a monster, with thought and feeling, which had ensnared them. These last would take no responsibility for the banks or the companies because they were men and slaves, while the banks were machines and masters all at the same time. Some of the owner men were a little proud to be slaves to such cold and powerful masters. The owner men sat in the cars and explained. You know the land is poor. YOu've scrabbled at it long enough, God knows.
The squatting tenant men nodded and wondered and drew figures in the dust, and yes, they knew, God knows. If the dust only wouldn't fly. If the top would only stay on the soil, it might not be so bad.
The owner men went on leading to their point: You know the land's getting poorer. You know what cotton does to the land: robs it, sucks all the blood out of it.
The squatters nodded - they knew, God knew. If they could only rotate the crop they might pump blood back into the land.
Well, it's not too late. And the owner men explained the workings and the thinkings of the monster that was stronger than they were. A man can hold land if he can just eat and pay taxes; he can do that. Yes, he can do that until his crop fails one day and he has to borrow money from the bank. But - you see, a bank or a company can't do that, because those creatures don't breathe air, don't eat side-meat. They breathe profits; they eat the interest on money. If they don't get it, they die the way you die without air, without side-meat. It is a sad thing, but it is so. It is just so.
The squatting men raised their eyes to understand. Can't we just hang on ? Maybe the next year will be a good year. God knows how much cotton next year. And with all the wars - God knows what price cotton will bring. Don't they make explosives out of cotton? And uniforms?
Get enough wars and cotton'll hit the ceiling. Next year, maybe. They looked up questioningly. We can't depend on it. The bank - the monster has to have profits all the time. It can't wait. It'll die. No, taxes go on. When the monster stops growing, it dies. It can't stay one size...
And at last the owner men came to the point. The tenant system won't work any more. One man on a tractor can take the place of twelve or fourteen families. Pay him a wage and take all the crop. We have to do it. We don't like to do it. But the monster's sick. Something's happened to the monster.
But you'll kill the land with the cotton.
We know. We've got to take cotton quick before the land dies. Then we'll sell the land. Lots of families in the East would like to own a piece of land. The tenant men looked alarmed. But what'll happen to us? How'll we eat?
You'll have to get off the land. ... It's not us, it's the bank. A bank isn't like a man. Or an owner with fifty thousand acres, he isn't like a man either. That's the monster.
Sure, cried the tenant men, but it's our land. We measured it and broke it up. We were born on it, and we got killed on it, died on it. Even if it's no good, it's still ours. That's what makes it ours -being born on it, working it, dying on it. That makes ownership, not paper with numbers on it.
We're sorry, it's not us. It's the monster. The bank isn't like a man.
Yes, but the bank is only made of men.
No, you're wrong there - quite wrong there. The bank is something else than men. It happens that every man in a bank hates what the bank does, and yet the bank does it. The bank is something more than men, I tell you. It's the monster. Men made it, but they can't control it...You'll have to go.
But it's ours, the tenant men cried. We ---
No, the bank, the monster owns it. You'll have to go.

--John Steinbeck, The Grapes of Wrath
With thanks to Charles Campbell, Walter Wink, Ted Smith, and Ezra Pound
No taxation without representation.
We wrestle not against flesh and blood.
Posted by jdaviddark at 5:35 PM 7 comments:

If I knew of a Ron Paul video somehow equivalent to this (in the sense that it seems to have been directed by David Lynch), I would happily post it alongside this one. This is me wishing the two men would appear on television to talk thru the events of the last few days. I'm currently tuning in to Robert Scheer, Amy Goodman, and William Greider. I'm wanting everyone who considers themselves "conservative" to explain their use of the word in correlation with the film _Children of Men_ and the work of Wendell Berry. Any suggested reading, viewing, or listening on the subject of economy ecumenically considered? 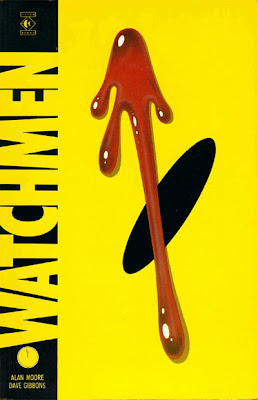 It keeps coming up in conversation. This little chunk of apocalypse that made it into my head before I could drive. Within a very short span time an old movie theater friend (former manager of the Capri Twin at Harding Mall...Can I get a witness?) wrote me to say that he'd finally acquired his own copy of The Watchmen and persuaded his wife to read it (i'd foisted it upon him...I dunno...Twenty-two years ago) AND a younger friend I'll refer to as Porkpie said, "Dave, you've GOT to read this." I enjoyed telling Porkpie that I'd read The Watchmen, issue by issue, as it was coming out. As Porkpie articulated his enthusiasm, I became reacquainted with the depth of the Alan Moore/Dave Gibbons vision and remembered, as I do every few years, how its witness colored my views on all sorts of things even as I wandered away from "comic books." The Watchmen raised the bar so high that I couldn't quite put my money down on anything that followed it. I think there was talk of Terry Gilliam (Walter Hill too) doing a film version even before Tim Burton tackled Batman. I hope the film-to-come is good enough to get people giving the comic some time. I suppose the purpose of this post is to urge everyone who means to see the film to go acquire or borrow a copy (any decent library....that friend you strongly suspect has one) and read it beforehand. It's gritty and graphic and all that, but also devastatingly truthful. Come to think of it, I imagine it might've been my first experience with something I knew to be "objectionable" content-wise, as the saying goes, but illuminatingly grim like Shakespeare or Melville or Ralph Ellison. Maybe it prepared my heart for Dostoevsky or something. Anyway, I thank God for it.
Posted by jdaviddark at 3:12 PM 5 comments: