No such tales are told 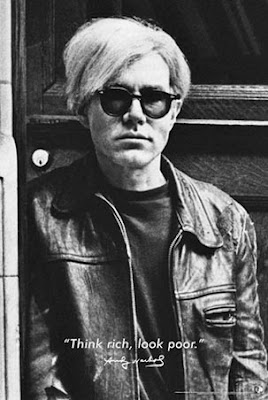 America is the wealthiest nation on Earth, but its
people are mainly poor, and poor Americans are urged
to hate themselves.... It is in fact a crime for an
American to be poor, even though America is a nation
of poor. Every other nation has folk traditions of men
who were poor but extremely wise and virtuous, and
therefore more estimable than anyone with power and
gold. No such tales are told by American poor. They
mock themselves and glorify their betters.
- Kurt Vonnegut
Posted by jdaviddark at 12:42 PM

This is a fantastic quote - I have been thinking about this very topic in terms of rich european musical traditions born in adversity (especially klezmer - does this have a parallel here in the blues?) and diet - there is not a unified rich US food tradition comparable to italy or france and we (and our health) are all the worse for it)...i also came across this from vonnegut a few days ago: “We are here on Earth to fart around. Don’t let anybody tell you any different.” i am hoping this will lead me to more meaningful employment...
thanks, as always...

Today's security word is "andsis"; which makes me think of going for an outing with more than just my brother.

Find a copy of, listen to and read -or both- "Premature Autopsies (Sermon)" from "The Majesty of the Blues" by Wynton Marsalis. I think we do have a folk tradition of vagabond minstrels, sages and prophets. We just tend to either "stand aside and look" as they're killed, or we make them rich and rob the poor of their voices.

I read an article just the other day about a study showing that the poorer classes throughout the world are also the happier people.

Ah, so you are really nothing more than a socialist. Too bad, really.

who is this "anonymous" and why does he keep saying mean things? :P

Debs,
Don't worry about it overly, Debs. I took up powers of moderation a few months ago when things took (in my opinion) a turn for the hateful (not to imply it was the same "anonymous"). I didn't think there was anything peculiarly socialist in posting such a quote/image, but I don't mind the label being tossed my way. Not to add perceived insult to perceived injury, but the more I try to seriously adopt Jesus's ethic and Paul's account of principalities and powers, the more I seem to court this particular jibe from particular quarters.
love and peace,
jdd

This is a great quote! There are many truths within it. Thanks for sharing.

i have weird thing with KV.
..
i.ll skip most of the weirdness:
especially jailbird:which i don.t know why most people didn.t see THAT comin.
..
i lost 7 years of art[and more really: songs: lyric: life 300 gigs] the day he died.
i was really by [then]: only doing this art to be a "2nd" income for my husband: who was now a massage therapist: still is:
..
this was not the life we married into.[to b not working together-with: even if we sucked]
..
once we were poor musicians and artists: working fruitlessly in an industry which is ridiculously harsh to "some folk" [ie: myself-unfit for public]
..
now we are poor, and i am only skilled in art and or music and or writing and or "things which do not matter?
..
and he works 6 days a week: has consistent pay: i am alone all the time: this is ludicrous.
soon maybe the state will give me a job. i am just so thrilled.
..
at least b4 we had "beautiful warm and happy we were smiling in slo motion holding hands":
which was my: i guess response to:
.
"and everyone was happpy and nothing hurt" [kv]
during the harshness of the industry which we did leave on purpose.
..
now :
full circle:
i cannot be proud to be this way.
i am a pile of reduction
..
i am not 30 or 40 percent free anymore.
..
love: the last time you saw me i was seizing out your door, all i had to grab on to was a rolling baby carriage. i think it was because i hadn.t been out of my house for 5 years: and the painting: the card which revealed how why he painted it: and of course : that was a few months after i had lost a lot a lot lot.
..
being poor is one thing.
being poor and losing and keep losing and losing the things you build out of losing: so different.
..
i want to to be different now.
i want the movie show to go white.
but it is a never-ending movie.
.
xo.eternal: all my love