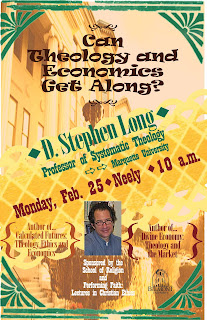 Reading this incredibly thorough Thom Yorke interview got me thinking about the way particular thinkers and artists came together for me in the late nineties and early aughts. There was a season in which I'd buy and read anything associated with Radical Orthodoxy with the same fervor I'd once reserved for folks like John Byrne and Alan Moore. As is often the case now, I found it difficult to grasp an awful lot of it, but I'd dutifully mark and transcribe whatever struck me as interesting in the hope that it might prove helpful later on. I don't know that anyone who's read Everyday Apocalypse loved it enough to scour the footnotes and journey over toward John Milbank's Theology and Social Theory, but I doubt I'd have ever thought to argue that there isn't a secular molecule in the universe if he hadn't given me "Once, there was no 'secular.'" Within a few days of the September 11th attacks, it was announced that our government's military response would be called Operation Infinite Justice at about the same time I'd underlined the phrase "nontotalizing metanarrative" in Milbank's volume. I e-mailed him to remark that we could do with more of such ways of viewing the world in our radioactive days, and he e-mailed back with one word: "Exactly." This was all the affirmation a young high school English teacher required. Throw in William Cavanaugh's Torture and Eucharist ("The distinction between politics and religion was not discovered but invented") and I had a way of talking about pretty much everything.

What these concerns have to do with Radiohead (or James Joyce or Ursula Le Guin or David Lynch) has been a driving question in everything I've written since, and this morning's Guardian interview almost felt like a checklist. Yorke:
We are still the generation who went into an illegal war...The commodification of human relationships through social networks. Amazing!.. Music that repeats what you know in ever-decreasing derivation, that's unchallenging and unstimulating, deadens our minds, our imagination and our ability to see beyond the hell we find ourselves in. My problem with bankers or, rather, the banking system is, that it's the ultimate expression of "Fuck you, buddy". There is no communal human consciousness, no will to co-operation, we are all slaves to the market. It's as if it has always been thus. It hasn't...
These bankers have made personal fortunes by stealing, exploiting and destroying our assets, our workforce, our resources and our planet. All protected, assisted and now bailed out by our governments using our money. High priests to a false god that they've done very nicely out of, thank you very much.
Which brings me to D. Stephen Long. I'd do my darnedest to appropriate the insights of Richard King and Jeremy Carrette's Selling Spirituality and David Loy's Buddhist economics before realizing I'd gleaned similar wisdom via his Divine Economy earlier this century. Long turned me on to Michael Budde who observed how that which passes (or is advertised) as Christian "often has as much to do with the life and message of Jesus as a GM Pontiac has with real Native Americans--nothing except a claimed, mostly imaginary, continuity of name." And Long himself gave me gems like this: "The market as salvific institution is and must be heretical." There's so much more to say, but I'm up against deadline as Longs appears among us tomorrow (see above). If you're unsure as to how to get to Neely, e-mail me and I'll meet you somewhere near Belmont beforehand. This is all.

Posted by jdaviddark at 1:04 PM

missed this. how was it?