What Are You Nashville? 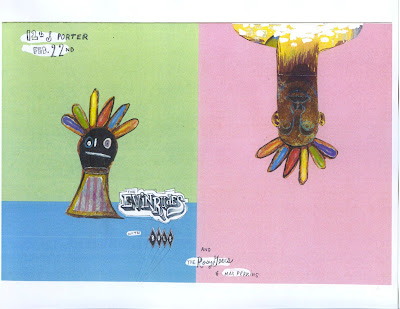 "What are you Nashville?" I whispered to myself while driving Sarah to a performance.
"You always say that when we drive by the Whiskey Kitchen," she remarked.
And this is completely true. It's where 12th Avenue approaches Broadway. We're out of "the Gulch" and approaching Virago and an abandoned McDonalds that says "Closed for Remodeling" and isn't. My proprietary feelings for Nashville kick in right about then. What's going on here, place that formed and forms me? How are we feeling? Are we at the end of our tether?
My Nashville is often a kind of alternative universe in which all my genius friends are incredibly famous. Communal touchstones. Local visionaries through whom I'm able to see the world. A couple of them had a "big label" moment in the late 20th century as the Evinrudes. Think Philip K. Dick and Eudora Welty and songs like "Jimmy's On Crack (And I Don't Care)". They're Brian Reed and Sherry Cothran. They've kept right on thriving at every turn to the delight of anyone nearby. They've both in bands with Sarah. And THIS FRIDAY NIGHT,they're going for it again with Evinrudes tunes aplenty alongside a few of their own songs, Brian within the entity called Rosy Gears ("Scarface the Pitbull," "Demon from Hell," "Lily White") and Sherry eponymously.
What's more, there's the matter of Bulb (J. Todd Greene, Tony Doling, Randall Lancaster, Jake Larson, Sarah, and Brian) who haven't opened for the Evinrudes in over thirteen years and who just recently finished what I believe to be their twenty-third album. It seems to me (and I imagine there are at least eleven people who would agree) that if Nashville has a William Blake, Bulb is it. One might prepare a little by considering this. An EP featuring the latest goodness produced and mixed by the endlessly inventive conjurer and wordsmith Chris Leonard will be on offer.
AND we have a young fellow I occasionally spy at Bongo Java re-reading Lost in the Cosmos. After a years-long hiatus from Bulb-related phenomena, the alluring, enigmatic, hypnotist collector Max Perkins is scheduled to reappear.
It's a 12th and Porter situation past the sad McDonalds on the other side of Broadway. Doors open at 8PM. Tell the people. Nashville happens.
Posted by jdaviddark at 8:00 PM